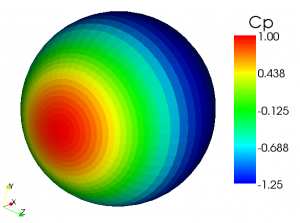 Example Cp distribution on a sphere

The IDP code consist of two modules – the aerodynamic solver and the trajectory analysis code. The aerodynamic solver is called ‘Non-Lifting Panel, 3D’, NLP3D, and is the AeroTex re-coding of the Hess-Smith “BOXC” panel method which featured in an early NASA sponsored 3D droplet trajectory code. Much of the basic algorithm is retained, unchanged, although with the advancement of computing power since its original inception, the original restriction of a maximum of 1000 panels has now been removed. The user must specify the geometry of the body in a specific order, which essentially consists of vertices describing a series of vertical cut-planes, starting at the nose of the fuselage and proceeding to the rear of the fuselage. Unlike most aerodynamic codes, because the code assumes non-lifting flow conditions, the geometry can be terminated early and the full fuselage does not have to be input, if desired. The code runs on a standard Windows PC. Run times for a flow solution are only a matter of a few seconds (very much less than the time it takes to set up the required input geometry definition). The user may specify the flow Mach number if a compressible flow correction is required, but this is not normally required. The user also specifies the pitch and sideslip. Unlike most modern flow solvers, the geometry is rotated to give the required pitch and sideslip and the direction of the flow remains fixed and is along the global x-axis. Up to three symmetry planes can be modelled but this option is currently disabled, i.e. a full section of geometry must be input. The ‘frames’ describing the body geometry can be spaced at different intervals, allowing fine spacing in the area of most interest (small panels) and larger spacing in regions of which the flow is of lower importance (such as the aft section of the fuselage).

The trajectory analysis module of IDP uses two input files generated by the NLP3D module. These provide details of the body geometry and the results of the flow solution, comprising the constant source panel strengths and other panel related information (files ‘GEOMETRY.DAT’ and ‘TAPE14’). The flight and icing analysis details are specified in a run file called IDP.DAT. This consists of the NAMELIST FORTRAN input of variables whereby default values are used unless changed by the user at the start of the run. The user must specify parameters such as the freestream air velocity, pressure altitude, static air temperature (OAT), water droplet diameter (in microns) plus a number of other code specific parameters which are used to control the trajectory calculations. An off-body velocity routine, included in the original NASA code, allows calculation of the velocity at any defined point (x,y,z) in the fluid, due to the sources on the panel surface. The code currently has five main run type options specified by the user using variable RTYPE:

An example of the calculated trajectories about the nose of an elliptically shaped body are shown below. The flow direction is from left to right. A ‘dead-band’ in which no trajectories (the black coloured tracks) pass on the upper surface aft of the nose can be clearly seen. 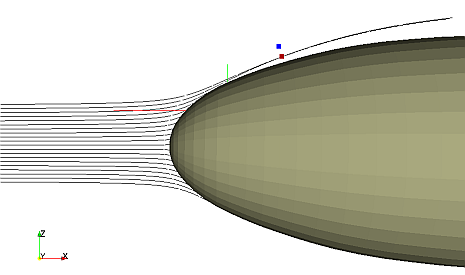 Example trajectories around a fuselage nose